I wrote about a side project, the NHL Finns site about 6 months ago. The site and the tech have been working great and I’ve been preparing some updates for the next season that starts tomorrow, October 3rd. Currently the live results page looks very uninteresting as the season hasn’t started yet.

I wanted to bring some more functionality that should be of interest to hockey fans. Some of them are: 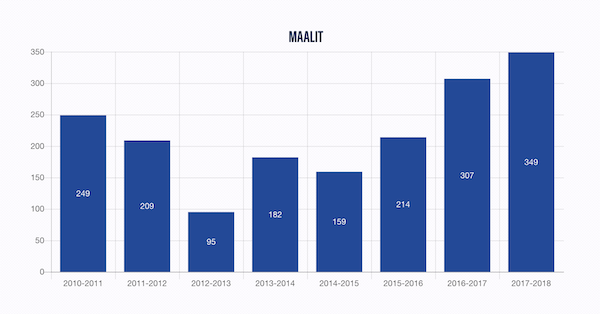 1. Adding graphs to be able to visualise different stats

2. Showing statistics since 2010, not only the current season

3. Navigation between different game dates in the results section

Some things have been fixed and most likely some others broken:

Additional features are also in the pipeline. Some of these depend on the MySportsFeed feed data being updated:

A lot of the changes are based on updated data feeds from MySportsFeeds. The new version of the API is more consistent and it is easier to work with what comes to fetching and parsing data. There is also more data available, for example, related to player contracts and salaries. Even though I’ve been storing this data from the feed to the DB, it’s not exposed in the UI anywhere just yet.

I’ve been also looking into different graphing libraries that could be used to visualise stats while still keeping the site performance good. The shortlisted ones were in the end Chartist.js and Chart.js. Chartist was smallest file size wise but it required some extra work to get plugins working that are needed for some of the upcoming features. The plugin ecosystem was also not quite as extensive as for Chart.js, especially when using the charts in Preact components.

In the end I settled for Chart.js using the React wrapper (react-chart-2), which looks nice and is relatively fast to load. The site still loads faster than other sites like it but I’m not too happy about the extra 150kb that was added. There are only a few charts on the site at the moment but more will be added.

Elixir and the Phoenix Web Framework have been a solid base for this work. Code stays organised and easy to refactor when needed. The functional programming style makes it easier to reason about the code and its effects. Ecto, the most commonly used Elixir DB library is a pleasure to use and makes writing even complicated queries possible and also allows for raw SQL fragments when needed.

One of the main advantages of using Elixir and Phoenix is the performance. Seeing server response times like the ones below show the potential in the language and the web framework. 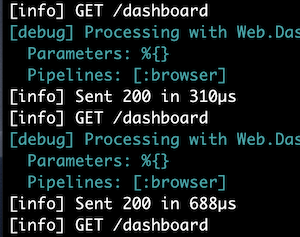 The upcoming Phoenix.LiveView feature could make building dynamic web sites much simpler. See the keynote from Chris McCord from ElixirCont 2018 (starts at about 11 minutes in although I recommend watching the whole keynote) or this post on The Level Journal for additional details. The feature is not yet complete/available but it looks like it could be the perfect solution for different kinds of dashboards updating live information. There might be some hiccups with some of the new feeds on the first days but otherwise everything should be ready for the season start.